South Florida has a plethora of beautiful, interesting birds that come in many sizes.  One interesting bird is the Limpkin.  It has a screech that could wake anyone from a deep sleep, and I personally can attest to that fact.

I have no idea why they are called “Limpkins.”  They don’t have a limp.  They move with the same lumbering gait that most waders have when they walk.  We have two littorals around our lake – one on each side.  A littoral is a miniature wetlands in which certain weeds and plants grow.  It invites many different birds who feed around water.  Insects, fish and snails are the mainstays in the food department for these birds.   Snails are the main food for Limpkins.

I happened to walk into the bedroom one day, glanced out the window, and saw a Limpkin meandering among the plants.  It occurred to me that it is a little late to see a Limpkin.  They usually make their appearances more frequently in the winter.  They are shy birds, but they want you to know they’re nearby because they aren’t quiet.  Their screeching could “wake the dead,” as the saying goes. 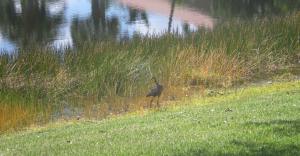 Grabbed my camera and kept pressing the shutter button.

Can you see the snail shell in the Limpkin’s beak?  Left click on the photo to enlarge.

I got many shots, and as I was shooting, I noticed a Common Moorhen came into the picture.  They are smaller dark colored birds that have bright red stripes down their faces and onto their top beaks.

After the Moorhen disappeared out of range, I realized the Limpkin still wasn’t alone.  Its mate was nearby.

Being a little shy upon seeing her mate?

He seems anxious to see his mate. 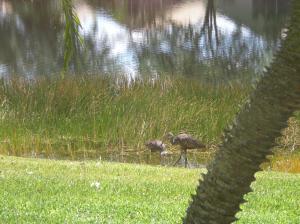