Another Sultry Morning In South Florida

This morning, my view was of stillness.  Not a minuscule of palm fronds shifted.  The lake was quiet – not a hint of a breeze kissed it.

Originally posted on Pussy Cats 3:
Romeo loves to sit on the cat tree to look out at the lake and is usually interested in something going on out there. Mr. Great Blue Heron decided to make his appearance this morning,…

First Winter Sightings of Ducks on My Lake

It’s always a thrill to see the birds starting to flock on the lake.  I was able to see only lone ducks this time – but, I’m sure – others will soon follow.

“Aves” is Latin for Birds

For the purpose of this post, I looked up the Latin word for “birds.”  I know about “flora” and “fauna” but never thought about Latin for “birds” until I started thinking of writing this post.

As you all probably know by now, I live in South Florida, and there is a small lake (Bob used to call it a “pond”) out back.   The aves (birds) scenery changes with the seasons.  The best time is during the winter, when many different species make their appearance.  I’m very much looking forward to that aves show.  And I have a front row seat right on my patio!

When Bob and I moved into our new home back in 1997, we discovered a resident large white duck that presented himself, strutting around on the grass and enjoying the clean lake on the property.

Donald Duck in back of our house.

Some people on the other side of the lake thought Donald was lonely, so they bought another white duck to keep Donald company.  Donald was visibly happy with his new companion.  Unfortunately, one morning, after a couple of years of all of us enjoying our resident friendly white ducks, they disappeared.  It was later discovered that they must have been attacked and killed by a roaming bobcat, which was sighted in the neighborhood on occasion.  We were all very sad that our ducks came to such a terrible end:  the gloom was palpable around the lake.

Our nextdoor neighbor moved in about a year after we did, and she loved feeding bread to the birds around the lake.  Everyone was warned there’s a Florida law forbidding the feeding of wildlife:  they have to be left alone to hunt their own food.  There’s no lack of enough food here in South Florida:  there are plenty of insects for them to feast on!  And, since the lake was stocked with fish and turtles by the state, there’s a plethora of dining delights for all!

I have to admit, even though I felt uneasy seeing the birds being fed bread, I enjoyed the activity of the birds running to get their “treats” thrown by my neighbor in back of her house. 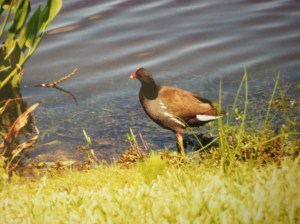 Female Common Moorhen in back of our house.

Most winters, a pair or two of Common Moorhens make their appearance.  They are recognizable by the red streak running down the front of their faces onto their bills.  They are funny, aggressive birds which make me laugh when I see them.  They run like someone is chasing them – with their necks stuck out far (which makes them look like they’ll lose their balance and fall on their faces); actually, it’s the other way ’round.  They are usually chasing other birds, no matter how big, who are unfortunate enough to meander near the Moorhens’ “camping grounds” in search of their own all day insect feast.

It becomes more special and entertaining when there are babies that have recently hatched.  Mom and Dad are teaching them where delicious snacks and treats are available, courtesy of my neighbor.  So, you can see why I feel somewhat uneasy when I see these wild birds are being taught to eat things that are not good for them.  When I first saw this happening, I did speak to my neighbor about it, but she didn’t want to hear of it.  You’ll have to excuse my wandering a bit about this, but I am an advocate for animals (birds included, of course).

Over the course of time, I’ve photographed other birds that appear in my sights.  I dug up a few more:

The shy, endangered woodstork in back of my house.

Woodstork finishing up his grooming.

The woodstork is a loner, as most large birds are, and is a big, tall and not elegant bird; in fact, he is very gangly, and has a walking gait that looks like someone who is hobbling.  It could be due to his very large, incongruous, heavy beak.  There was one, several years ago, which my sister described as looking like a “rumpled bed.”  His feathers never seemed to be neat!  BUT, when this bird is in flight, he soars and glides and NOW he IS elegant.

Great Blue Heron in back of my house.

The heron in this photo was a young adult; the older adults are larger and have more body mass and are taller.  There are some that we call the “grandpas.”  These herons are magnificent birds, and, in contrast to the woodstork, they are so elegant when they walk.  Of course, when flying, they are exquisite gliders, and their wingspans must be around 5 or 6 feet when mature.

Soon after I moved to Florida, I was driving and slowed down to turn into the apartment complex in which I was living.  Suddenly, a low-flying Great Blue flew right in front of my car.  He had evidently taken off from the clumps of bushes that were near.  My heart stopped at the sight.  I remember that experience as one of the most exciting and exhilarating in my life.

This photo shows the Great Blue Heron trying to swallow a fish from our lake.

Caught in the act.  I had to run to get my camera, hoping that I would get back in time to snap this.  I didn’t have to rush, as it turned out.  It took this persistent heron at least 5 minutes to finally get that fish down into his gullet.  He was very patient, and kept tossing it, trying to get the angle just right.  He also let the fish down onto the grass and then picked it up again in his attempts to swallow it.  Bob and I watched in spellbound silence.  We were so sure that fish was too big.  We were wrong.  He finally got it into his mouth, and as he swallowed it (with difficulty), we watched it slowly move down that narrow neck.  We shouted after his triumph.  Amazing! 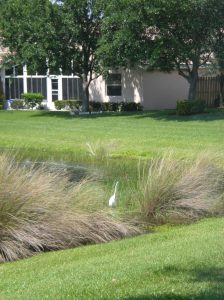 Great White Egret in back of my house.

Sorry about this photo.  Couldn’t find a better one.  But, I didn’t want to leave out this regal bird, who also has an elegant gait when slinking on his spindly legs.  He is slightly smaller than the Great Blue Heron, and has less body mass.  If you can believe it, his neck is even thinner than the heron’s.  I certainly can’t imagine him even thinking of trying to swallow that fish.  The Great White is also a super sight when sailing overhead.

I Don’t Care What’s Happening Outside

I really don’t.  It’s been raining, drizzling, totally cloudy, and getting cold as the sun set right now.  I really dismal day.

It’s bright and sunny in my home.  I’m enjoying my day – doing things I like to do, watching my TV programs in the background.  Spoke to several people on the phone, followed the ducks and white ibises on the lake out back.

Generally having a relaxing one.  Yesterday was busy and tomorrow will be also.

I had an interesting and uplifting phone conversation this morning.  Uplifting for the person I was speaking with, but for me, also.  It was a win-win situation kind of thing.  This lady – really no more than an acquaintance, but someone I have known for many years – had asked me to do her a favor several days ago, and I had to mull it over – she had asked me to set aside my “principles” and go forward.  We chatted about different things, and then casually I told her I made a decision:  it was a positive one.  I said I would do it.  Well, as soon as I said it, I could hear the smile on her face – her voice showed it all.  Her pleasure came through so strongly over the phone.  And a strange thing happened to me.  Actually a few things happened to me.  I felt relieved; pleased; and surprised.  I surprised myself – I had stood on this “principle” for a few years;  I was relieved finally, that I went over that “hump” that I was avoiding for so long; and definitely pleased with myself that the whole affair was resolved.  But, most of all, I felt happy, as if I had given a gift that took me great time and effort and to finally wrap up with gift wrapping and a bow for a special occasion.  Giving had its own rewards.  Rewards totally unexpected.