Are We Going To Allow Congress to Snuff Social Security Disability?

I’ve heard “whisperings” about Congress’ focus on “routing out” the fraud perpetrated by “lazy,” “shiftless,” and “indolent” receivers of Social Security Disability (SSDI) checks.  The “do nothing” Congress, under the “preeminent” leadership of Mitch McConnell and John Boehner, intends to do further harm to disabled and/or extremely ill persons by reducing their SSDI monthly payments. 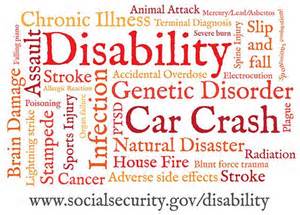 Children, veterans, patients suffering from debilitating diseases, etc., – all who depend on their small “stipends,” – will be pushed further into the poverty classification if McConnell and Boehner have their way.

Our Republican Congress is desperate to show their constituents that their “duly elected” representatives are capable of showing some “progressive” action and can contribute to the “betterment” of governing.  So, why not pick on those who are the most vulnerable and who have the weakest voice?

It is troubling that the media seems fit to avoid this subject like the plague (or Ebola?); however, I did find an article, written by William Greider, appeared in The Nation.  In it, Mr. Greider expounds on the extreme shower of disservice that Congress plans to plummet down upon those most vulnerable.

“This is why we need “bleeding-heart liberals”—politicians who will stand up to defend the scorned and tell the truth about the Republicans’ propaganda. This season, the country has two tough-minded senators assuming that role—Sherrod Brown of Ohio and Bernie Sanders of Vermont. Sanders is ranking member of the Senate Budget Committee and Brown is ranking member of the Finance Committee’s subcommittee on Social Security. They will be heard in Washington. Given broad public support, they can smash Mitch McConnell’s plot to disable and maybe destroy Social Security.”

I hope that these two Senators will be able to rouse the support that is needed to keep our SSDI where it is, or – am I reaching too far? – even cause the increase that is so direly needed.

The following is taken from James David Chapman’s page and is entitled:  “The M.E. Argument Clinic.”  It is a go-round conversation, and exemplifies some of the frustrations M.E. patients experience when trying to get a diagnosis at the doctor’s office.

Dr. Nancy Klimas, who is an internationally-known expert and advocate for M.E. (Myalgic encephalomyelitis), is seen on this Youtube video.  She describes the multi-symptom disease as “Wicked.”  The video is only 1 minute and 30 seconds long, but in that short time, she gets to the “heart” of the symptoms – they are profound.

She also states that she and other experts regret that the name, “CFS” (Chronic fatigue syndrome) was ever given to the illness.

Letter to President Obama re: National Institutes of Health

Tomorrow, I’m mailing yet another letter to President Barack Obama.  This time, it’s in reference to Dr. Francis Collins, Director of the NIH.  There is a workshop planned for September 2014, which, in my opinion and that of other M.E. advocates, should not be taking place.  Please read on:

Re: M.E. (myalgic encephalomyelitis) and Dr. Francis Collins, Director of the NIH (National Institutes of Health)

Today, my letter is about the planned Pathways 2 Prevention (P2P) workshop, projected to take place September 2014 to discuss the “Role of Opioids in the Treatment of Chronic Pain.”

My daughter is suffering from M.E. Her quality of life is greatly diminished:  she has body pain all the time; suffers horrific headaches; and many other symptoms.

Chronic pain is a huge national problem, and there are many issues associated with opioid treatment. So you would think that NIH would have made an effort to involve stakeholders from across the chronic pain community, right?

There was no patient representation on the Working Group for the meeting. Working Group members provided their input at a meeting held August 28–29, 2013. Multiple advocacy organizations in the fibromyalgia community had no idea the workshop was even happening, including the National Fibromyalgia and Chronic Pain Association. At least one opioid drug manufacturer was also completely unaware of this Workshop – despite having a regulatory affairs office.

I, and many other advocates for ME/CFS, have asked Dr. Francis Collins to cancel the P2P Workshop and reexamine the best way to collaborate with the ME/CFS research and clinical community. The NIH has failed to engage stakeholders in a meaningful and substantive way. The P2P Program is simply not designed to do this, and now there is more proof of that from another planned P2P Workshop.

I think what we’re seeing is indicative of NIH’s mindset. Unlike FDA, which has made great strides towards incorporating patients’ input into decision making, NIH is an ivory tower of researchers with limited history of engaging patients and other stakeholders. It may not even occur to them that they need to do this. NIH is not just failing to engage with ME/CFS stakeholders in the P2P process; NIH is failing to engage with ANY stakeholders through P2P (Pathways 2 Prevention).

In closing, I would like to point out that this planned workshop’s purpose of discussing opioids in treatment of chronic pain has a direct impact on all patients who experience great pain, no matter from which disease they suffer. As an advocate for M.E., I ask that you investigate why no patients’ input is being included in the planned workshop, and why Dr. Collins has approved this project which may harm, rather than help, those who suffer great pain.

I love flash mobs. They bring surprise, joy and happiness to the recipients, but also bring a sense of giving to the participants. Here is one of the best I’ve seen in quite a while. It was a celebration of life in honor of this terminally ill woman.

In October of 2012, a mother named Amy was diagnosed with stage 3C metastatic ovarian cancer. The diagnosis was a terrible one, but after surgery, 4 months of chemo and lots of struggling, it looked like things were beginning to look up.

Her cancer was in remission for only a year before she and her family received awful news. It was back, only this time it was resistant to traditional treatment. That means her cancer will ultimately be terminal.

No one knows how much time they will have left with their darling mother, wife, sister, daughter and friend… but they’re going to make the most of it.

To celebrate their love for Amy…

More than a few people decided to put together an amazing surprise.

To see the amazing surprise they had in store for Amy, watch the video below!

Life can be cruel and unfair, but at least the…