Memories Of Dad’s Love Of Electronics

Our Dad was a techie nerd or nerdy techie – whatever you want to call someone in the 50s, 60s, 70s, and 80s who loved all the newest electronic gadgets on the market.  My awareness of his interest in electronics began when we lived in the 2-storey house on E. 42nd Street in the “dead end” behind the largest cemetery in Brooklyn.

What were these gadgets?  The Victrola and RCA Victor “his master’s voice” records (he had a one-sided one on which was recorded the Anvil Chorus).  He was the talk of the family and neighborhood with that one.  Another favorite record was “Humoresque” by Dvorak.  He played it over and over.  I was a very young girl at the time – 9 or 10 years old.

A new black, heavy metal (it-wasn’t-going-to-fall-to-the-floor heavy) telephone with holes in a circle that you put your finger (usually the index) into, in order to “dial” someone’s number.  (We still use the word “dial” when we speak about calling someone’s number – never say, “key in” or “push the buttons.”)  Numbers like CLoverdale 8 or HYacinth 7 or MUrrayhill 2, etc. were the rage.  Remember those?  I’m speaking about New York prefixes.  At a time when there weren’t any area codes, and to get connected to someone in another city, you needed a Bell Company operator to connect you.  I remember our phone had a very heavy receiver, and we couldn’t speak long, because the weight of it made our hands very tired.  After I was married, and lived in Brooklyn, we had a CLoverdale 8 number.

Dad built a shelf for the phone in a corner of the dining room near the stairs going up to the second floor of our house.  The only thing missing was a chair.  But we really didn’t need a chair.  The stairs were comfortable enough.

We were also the first family on the block to get a TV.  It was placed in the far corner of the dining room (opposite corner from where the record player was situated).  The screen (10 inches wide) sat in a large blond wood cabinet.  All the neighborhood kids were invited in to see this newfangled machine.  Everyone complained that it was too small to see the picture.  My father solved that problem with a big magnifier that was available.  Some smart inventor came up with that idea – “necessity is the mother of invention.”  That monstrosity stood on a heavy stand and stood about a foot away from the small screen.  The image sure was bigger, but it was distorted.  The magnifier was not doing the job to anyone’s satisfaction.  So, we did away with it, and just had to move closer to the TV.

We had moved away from E. 42nd Street when I was about 12 years old.  Life went along, and I got married and then my sister got married.  After she got married, Dad took over the bedroom we had shared and made it his den with comfortable seating, etc.  This was before the term, “man cave” became popular.  Dad set it all up with his (newer,  of course) record player, shelves for his large collection of records, his radio, and telephone extension.  Wires were spaghetti-ed all over the room.  I don’t think Mom liked that idea too much, but she couldn’t do anything about it.

Years later, Mom and Dad moved to Florida.  Of course, Dad set himself up with his cabinets and shelves in the “Florida room,” and with his recording and dubbing machine, his myriad of records, and hundreds of blank tapes that he used to record programs and movies starring his favorite stars, starting with the silent films.  Their community had a special TV channel on which residents could view all these “oldies but goodies.”  Dad had literally hundreds on tapes.  He had books where he organized and categorized and cross-referenced and stored every one of them.  I think he would have loved computers.

Memories of a Time Past: Part 6

Brooklyn was where I was born and raised, and also where my Mom and Dad were born and raised.  Home was always “Brooklyn.”  I was never a sports fan per se, but the Brooklyn Dodgers was “my” team.

Mom and Dad were married in Brooklyn, and so was I, and also my sister.  When I hear “Brooklyn” mentioned, my ears perk up and I want to know in what context my borough was spoken about.  It’s just the way it is.

I have sweet, loving memories about my Mom’s parents:  Tillie and Louis Blacker.  They were sweet and thoughtful people, and they were always available for family – whatever the reason they were needed, they were there for you. 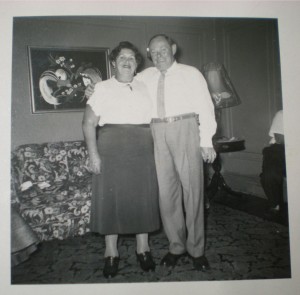 Grandma and Grandpa lived in an apartment house on Nostrand Avenue, between Church Avenue and Linden Boulevard.  Third floor walk-up.  Even though I was a young girl (7 or 8), the apartment didn’t feel that large; although there were 3 bedrooms.  When we came into the apartment from the dark, small stair landing, we walked into a narrow hallway.   There was one bath to the left as you walked into the apartment; a tiny kitchen after that, with a very small table pushed up against the wall with 3 chairs (I remember the chairs creaked when you sat down), and a very dark wood, ornate, old cabinet where Grandma kept some groceries.  She always had a box of Cheerios in that cabinet.  She knew I liked Cheerios.  (Yes, there were Cheerios that long ago!!)

There was a nice-sized living room which shared a wall with the kitchen.  And the master bedroom, about the same size, was next to that.  The 2 other bedrooms to the left of the hall were quite small.  No dining room.  They had a narrow table against the shared kitchen wall in the living room, which pulled out to make a long table when the whole family was over for dinner.  I don’t remember having dinners there, but I’m sure there were. 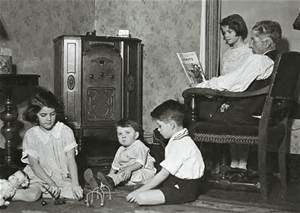 I remember my Great-grandmother (Grandpa’s mother) lived there.  She had the small room to the right of the hallway as you walked into the apartment, and past that, my mother’s youngest sister had her bedroom.  Great-grandmother was a kindly lady.  She was suffering from old age, and couldn’t really leave her room.  My Mom would attend to some of her needs when we visited during the day.  I remember Great-grandmother (I called her Baba) would sit by the window whenever we were there.  She loved my Mom and was so grateful when my Mom tweezed her brows and trimmed her facial hairs.  She died when I was nine years old.

There weren’t any phones in the building at that time.  But, there was a communication system, nonetheless!  There was a candy/luncheonette/newspaper/magazine/cigarettes and cigars store downstairs.  The owner was a very nice man, and he had a public phone booth.  He allowed the tenants in the building to give out the phone number so they could communicate with family.  Whenever a call came for Grandma and Grandpa, he would stand outside under the window, and call, “Mrs. Blacker!”  He must have had a loud voice, because even with the windows closed, he was heard.

Memories of a Time Past: Part 4

My father’s cousins formed a “family circle” by the name of “Weiser Family Circle.”  It was a cousins club.  All his siblings and cousins and their children, and aunts and uncles were members.  Weiser was his mother’s maiden name, so the club consisted of only family members from her side of the family.  I don’t remember her coming with us.  Anyway, it was just as well she wasn’t there.  She was not a well-liked woman, to put it mildly.

These annual jaunts started when I was a teenager.  We always got a very early start.  It was easy to get together since we all lived in Brooklyn.  We arranged to meet at 6 am at a cafeteria to have early breakfast before getting started on the long trip.  I remember how sleepy everyone was, and a little grumpy – no, a lot grumpy.  No one was used to getting up so early, packing up the picnic baskets and games and charcoal and BBQ paraphernalia, and getting it all into the car.

After coffee and something to eat, everyone felt better and started to get excited about the day ahead.  And the long drive – oh, what people do to have a good time!

Our picnics took place in the Spring and the destination was in upstate NY.  I believe it was in the Saranac Lake area.  We all had to take sweaters and jackets.  It was very chilly in the mornings and as the sun started to go down, it got chilly again – in fact, I remember we were freezing one time, and there was a time when it started to rain.  We all tried to avoid the rain by getting under the picnic tables.  The barbeque fires were in danger, but we couldn’t do anything about that.  That particular time, we just had to pack up as quickly as we could, get things into the cars, and cut the day short.  Oh well.

My friend, Marian came with us one year. 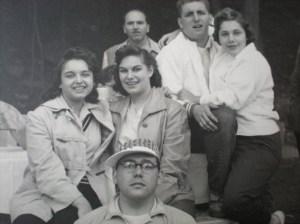 Marian is on the left, and I’m in the middle. You can see we’re wearing jackets. It was usually pretty chilly, if not downright cold.

They were good times.

A Story of Friendship

Tomorrow, my friend Marian, is coming to visit me. She will be staying for 9 days.  She lives in Connecticut, and this visit was planned LONG before there was the polar vortex that made its latest appearance.

Marian’s original plan was to fly to Miami on last Thursday to visit her son and his family before coming to stay with me on Monday (tomorrow).  So, when that storm made its few passes in the northeast, of course all flights were cancelled, and my Marian, as did many others, had to scramble to get another flight to South Florida.  She was successful and has already landed this evening in Miami and will have her shortened visit with her family.

Marian and I grew up together.  We lived across the street from each other in Brooklyn while we were teenagers.  We hung out together a lot, and double-dated many times.  We were really close friends.  Then, she got married and moved to Connecticut, and a year later, I got married to the guy who lived “down the block.”  It was a close-knit community.  As can happen, people sometimes lose touch when life gets complicated.

We hooked up again through a mutual friend whom I hadn’t contacted in 45 years(!), whose son I found on Facebook.  It’s a convoluted thing.  The long and the short is that life has its strange twists and turns and we can end up traveling a full circle if we’re lucky! 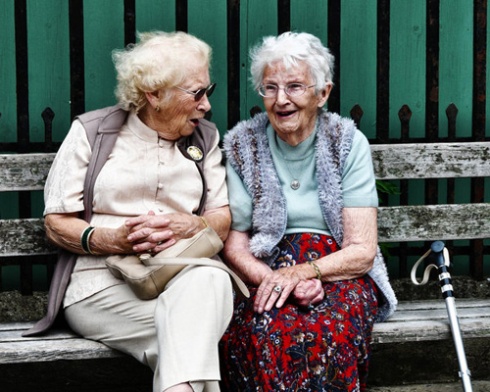 And tomorrow, we close that little space in our life’s circle.