My Truth About Invisaligns and A New-Fangled Container

For the last 2 years and 3 months, I’ve had to wear “Invisaligns” to correct a mistake a former dentist made with a “night guard” (NG).

Without going into gross details, suffice it to say that my whole bite became misaligned, and my mouth was reduced to a very bad bite which affected my ability to chew properly as well as rendering some teeth to become crooked.

Finally, two weeks ago today, I had impressions taken for “retainers” and a week ago, I picked them up.

FREEDOM!!  Now, I could go a whole day without worrying about making sure I wore the Invisaligns 19 – 20 hours a day for them to be effective.  Now, I could even have a piece of fruit during the afternoon in peace, without removing the Invisaligns, brushing and replacing them.

(I’ve seen many commercials on TV for Invisaligns.  They misrepresent them by omitting the fact that sure, you can eat anything, but you have to take them out in order to eat.  Misrepresentation by omission!)

I returned home with my new retainers safely residing in the container in which the orthodontist placed them.  I got comfortable, relaxed, and enjoyed the company of Patches and Rusty.

A thought occurred to me:  The container looked kind of strange – reminded me of one of those intergalactic transports from Star Trek.  I got up and took a good look at it. 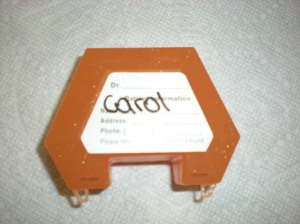 I couldn’t figure out how to open it!!  It truly was strange.  I pulled, pushed, looked for a place to put my fingers to open it, but there wasn’t any visible way to get it open.  I tried prying it open with a pointed knife (not a good idea).  Nothing I did made it move in the slightest.  I was ready to take a hammer to it.  How was I supposed to put the retainers in my mouth for the night, if I couldn’t open the damned thing?  I was getting frustrated.

I called the orthodontist’s office.  Fortunately, they were still there.  I complained about this new-fangled thing, and what was wrong with the old style?  That certainly was easy to use.

The woman put me on hold for a minute.  She came back and holding one of those containers, she proceeded to instruct me as to how to open it.  I followed her instructions, et voila!  Success.  It popped open.  It was as simple as could be.  Just a push in the front released the hooks that kept it closed.

I suggested in future, they should have an instructions sheet to go along with the container.  The woman told me that they were having complaints.  Duh!

Sometimes, these new inventions that are considered “progress” should have never been invented.

Moral:  It was probably cheaper than the original ones.

Where Is That Truck That Ran Over Me?

Yesterday, I had the pleasure of going for my every-four-week massage and chiropractic adjustment.  I like to keep in shape as best I can, and it is one of life’s pleasures that is very important to me. 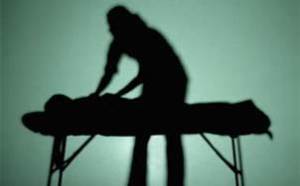 I knew before going, my regular therapist would not be there, because she was away attending her son’s wedding.  My chiropractor has a new chiropractor practicing in her office.  I was told she, Dr. F., had been a massage therapist for 20 years before becoming a chiropractor.  So, I had Dr. F. do my therapeutic massage.  Halfway through it, she thought it was an opportune time to adjust my neck.  A great crack and then proper alignment was accomplished!

She then continued and worked on my shoulder and middle back.  She did a fantastic job!  I was advised to drink lots of water, because the massage was deeper than what I was used to from the other massage therapist.

Went home, drank a whole bottle of water and, started to get things ready for supper.  After supper, I started to feel very tired.  Had extra water to help flush out the toxins that were loosened from my muscles during the massage.  Was so tired, that I couldn’t wait to get to bed and I found myself in bed way before my usual time.  Fell asleep immediately!

This morning, I could hardly move myself out of bed.  That massage was so great, that I felt like a truck ran over me!

Today, I had lunch with sister and daughter – special time as always.

Another appointment loomed afterward – doctor appointment.  When that appointment was over, I stepped into the elevator going down.  Had to maneuver carefully – it was loaded with people plus a man in a wheelchair with his caregiver.  As the elevator door closed, a small voice behind me spoke.  I turned around and saw she had a lovely face and was smiling at me.  Her words were, “I like your hair.”