We need to spread the word about the drastic, terrible things that Trump is allowing to happen in our beautiful country. Who knows how long we will be able to enjoy everything we cherish? Bsrbara, thanks for posting this info.

Corrections and clarifications: Based on information from the National Park Service and released by the White House, a previous version of this story erroneously included the World War II Valor in the Pacific National Monument on a list of sites subject to the executive order. According to Proclamation 8327, the monument is 6,310 acres – not square miles – and therefore would not meet the 100,000-acre threshold in the executive order, the Department of the Interior says.

WASHINGTON — At least two dozen national monuments are at risk of losing their federally protected status as a result of President Trump’s executive order asking for an unprecedented review of their designations.

Under the 1906 Antiquities Act, either Congress or the President can protect federal lands by designating them as a national monument. And while Congress has occasionally revoked that status for existing monuments, no president…

What Happened When I Went To Renew My Driver’s License…

Has it been 8 years already?  Here in Florida, our driver’s license is good for eight years.  It was a beautiful, Spring-y day here in South Florida, with lots of blue sky and great, puffy clouds hanging up there.  A great day! 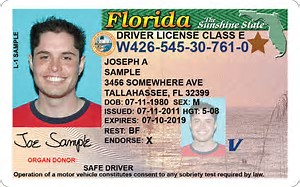 I had received a reminder postcard a couple of weeks ago to renew my license.  Since my schedule is so busy, I set aside last Wednesday to take care of that nuisance task, even though I had more than a month in which to complete this requirement.  This is one of the few things that must be done in person.

So, I collected all the necessary legal documents, as stipulated on the postcard:  proof of my change of names from maiden name to married names (government-issued marriage certificates); two proofs of address (utility bills, property tax bill, etc.); social security card; and official (government-issued) proof of birth.  A blank check, because, while this office will take credit cards, they will charge extra for that convenience.

When I parked, I noticed there was not a plethora of parking spaces.  I got the last one close to the DMV office.  I arrived at 2:45pm, and originally thought that was a good time so that I wouldn’t have to wait too long.  Boy, was I wrong!  I was the last one next to the door.  About 25 people ahead of me.

After a half hour wait, I was finally at the head of the line.  Wouldn’t you know?  One of the 2 clerks decided it was time for a break.  So, there I waited, starting to feel the impatience gather.  Finally, after 10 minutes, another clerk took her seat, got her personal things put away, took a few more gulps of coffee, and called me.

Briefly stated my reason for being there (driver’s license renewal and, oh yes, vehicle registration renewal as long as I was there).  I presented all the documents I went to all four corners of my house to collect.  She asked me for my current license.  I presented it, and she said, “Oh, you don’t need all these papers; you already have the yellow star on your license.”  So, why did the postcard state I needed to bring all these documents?

In less than a minute, I was given a number:  D363, with the added information that I would have to wait about an hour and a half to 2 hours before being called for the test.  I had a choice of waiting, or coming back another time.  What would you do?  I waited.  I had taken a book to read with me, in case I had to wait. 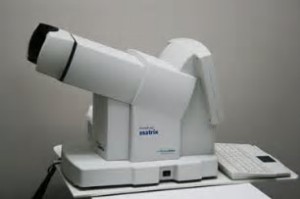 Actually, this machine is quite modern as opposed to the one I had to use.

I was called after only a half hour.  This is where my anxiety began.  I had to take an eye test on their machines, which were grossly outdated, clumsy, and, I believed, purposely “set up” so as to turn away as many people as possible from passing the eye test for a driver’s license.  I refuse to say the machine was “programed,” because it was obviously purchased before computers were put into common use.

I neglected to state above, that I have a chronic “dry eye” problem; however, I started using a prescription eye drops for it, to be used twice a day.  I really should have made an exception this day, and taken more drops just before driving to the office.

She told me to read line 6. Tiny numbers!  There were 2 sets of numbers.  I had no trouble with the first set; however, trying to read the second set was like trying to read with cotton stuffed into your eye.  I complained the machine’s glass cover was smudgy (it probably was my dry eye), so she directed me to another machine on the other side of her desk.  I was told to press my forehead to the bar above, so as to keep my head steady.  Fine.  I tried reading the set of numbers:  3868635.  Wrong!  How’s about 6836683?  Wrong!  How’s about 8836338?  Wrong!  Oh god, I was sweating and pushing my forehead tight against the bar, but that didn’t do any good.  How’s about 3568863?  Wrong!  Finally, I got it right by guessing!  Don’t ask me what it was.  All I do know is that she finally said, “OK.  You got your license!”

When I finally got home, I washed my hands and face.  Couldn’t stand the thought of how many foreheads were pressed against that bar.  When I looked in the mirror, I saw a deep line indented across my forehead.

I spoke to my sister this afternoon.  Told her about my experience at the Driver’s License office.  She was with her husband, Stu, and she told him about my experience with the eye test.  Stu said I could have gotten a note from my eye doctor.  ????