The doctor said I gained a pound at my recent visit. I wasn’t too active because I wasn’t feeling too good, and just slept a lot.  That’s fixed now, but she tried to fix the weight problem.

So, Mom decided to starve me.  She took away “free feed.”

But, it didn’t last very long.  I persuaded her to go back on “free feed.”  Now, I’m happy again. 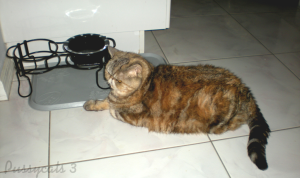 One of my favorite sports.  It’s so relaxing. 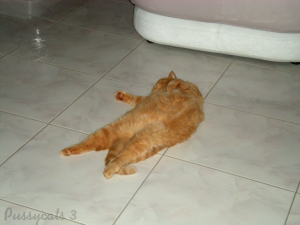 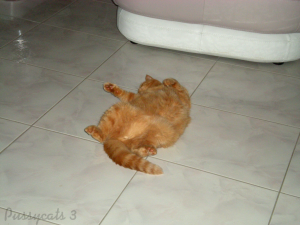 Breathing in some fresh air.

This is a rare occasion.  Mom doesn’t let us out in the screened vestibule very often; in fact, this may be the first time!!

Welcome To The Swamp

Posted on January 25, 2017 | 1 comment
What happened to draining the swamp?  He’s draining ours and filling up his own.  It’s what he meant all along.  Liar, liar – pants on fire.  Remember that one from our childhood?
It seems to me, that the Trump administration is wont on locking up our democracy in a box, burying it way underground and throwing away the key. What is going on in the Oval Office is extremely scary. In his Executive Orders, Trump does not want any Federal workers to communicate with the Press. They can’t be interviewed, cannot write on their blogs, etc. If found out, they would be fired.
An authoritarian is what we have leading our country.  We don’t want to follow.  The path is the wrong one.  He’s scary.  And I believe he has all his followers in DC scared as well.  He’s unpredictable.  They (and we) don’t know what he will do next.  He’s preparing a wall – yes, a wall around himself – with the religious fanatical conservatives who will do whatever it takes to bring our democracy, including our “inalienable rights” down to a level we don’t want.
Trump’s press secretary Sean Spicer, berated the press corps for [their] accurately reporting the crowd size at Trump’s inauguration, then warned them that the president will hold them “accountable” for this kind of reporting in the future.  On Sunday morning, Trump’s team blacklisted CNN.  (www.moveon.org)

Our constitutional freedoms are being stifled. The Press Secy cuts off the reporters from completing their questions and snipping at them, saying, “You asked your question,” and pointing to someone else.  Blacklisting media outlets?  Banning Press members from Press briefings?  Pressing down the Press?  That’s what gives the Guy his jollies.
Is it because we have been “spoiled” by the past occupants of the White House? Or is it because the current occupant is erasing too many of the good things in American life for the majority of citizens?
Taking away a small discount for mortgage insurance for first-time home buyers is a really smart move in helping(?) out these people.  It was extremely important, because it was the first thing Trump signed in his Executive Order spree.  He’s giddy.  He’s undoing Pres. Obama’s Orders.  Hurray!  The party has started.  And it goes on.
There is to be a halt on grants as well. Grants are very important – they make important scientific research possible that wouldn’t be accomplished without government help.  There are a great many illnesses and diseases that are wanting for treatments and cures.  These will be stifled.
Human rights are women’s rights.  Remember that?  He want to take them away.  Human rights are LGBT’s rights.
Remember the part of our Constitution about separation of Church and State?  Arch-right, alt-right, evangelicals and fundamentalists want everyone to adhere to their beliefs.  Some states have passed laws pushing religious beliefs over basic human rights.
The government benefits that have helped so many, who suffer with chronic illness, disability, job cut backs, etc., will be cut back.  Who knows what will become of Social Security, education, healthcare, etc.  Privatization of schools is something I would not like to see; instead, the salaries of good teachers should be increased, get rid of bad teachers, get our public schools up to a level in which all children will get a real good education, and not just the drabs due to poor funding.  It’s a shame that teachers have to take money out of their own low salaries to furnish the necessities of a classroom because the state and federal governments do not provide enough money for this.
The big hullaballoo that is taking the media by storm is Trump’s claim of losing the popular vote because he claims “between 2.5 and 2.9 million were illegally cast.”  This claim is totally false.  There is no proof, and Trump’s own counsel agreed the claim has no basis; however Trump is pushing for a “major investigation” to find out how this fraud was perpetrated.  Trump is using this as a diversion, I believe, to take away from the fact of his signing Executive Orders to bring us back to the 19th century.  I never saw a pen fly so quickly on paper.  And, true to his showman and egotistical nature, he holds up his large signature for the world to see – so proud is he.
IMPEACHMENT should be begun. I think it’s not going to do our country any good to wait until we are ruined (“let’s give him time, let it play out” say the ones who are not looking into the future and seeing what this Hitler-like president is doing and bent on accomplishing).  I’m sure the billionaires would not agree with me. They are laughing up their high-end expensive shirt sleeves, partly because the DOW Jones has finally reached and passed 20 thousand, and now this man has made them extremely joyous.
Extreme isolationism is on the horizon as real as the setting sun.  Don’t you see it?  He’s pushing away so many of our global friends with all his negatives and high tariffs – questioning our trade policies.  China will be taking up the niche we are leaving open by abandoning the agreements in the treaties.
As quickly as he can, he is whittling away our rights, our democracy, our enthusiasm and creating a large population that is extremely divisive, puzzled, angry, and worried that we will never be the same country, after he and his cronies are finished with it.
[ Header image from http://www.freewebheaders.com ]