Even with this space between them, they still kept a watch on the other!

At opposite ends.  Romeo and Patches seem to have reached an agreement on the couch.

At This Time Of Year

Remember to reach out to those living with illness and pain especially during this time of the year.  It can be a very lonely and isolated time for them. Give them a call, a smile, a hand, a hug and an encouraging word that shows you care.

I doubt there is no one who could use an extra dose of caring from a friend, a relative and yes, even from a stranger.

Speaking personally, the month of December has proven to be a very difficult month every year.  It is the month when I lost both my husbands who I deeply loved.  December anniversaries and events keep running through my mind.

I don’t look forward to this time of year and wish it would hurry along, so that the new year may begin with feelings of freshness and hope for a better year.

Confident should be his middle name!

This photograph speaks for itself.  Just look at that body language!!

How Did Marijuana Fare In 2016 Omnibus Spending Bill?

According to an article in The Daily Chronic, the following marijuana re-authorizations for 2016 took place:

Unfortunately, the following individual provisions were not included:

The parts that stand out for me is:

This is a very slow and frustrating process.

In the meantime, patients suffer and Congress shows it DOES NOT CARE about our very sick and needful military veteran citizenry.

And, rubbing salt in the wounds:  the licensed, lucrative, high tax-paying marijuana businesses are not allowed to use the same banks to which small, under-funded, and low tax-paying businesses across the country have access.

Is there something wrong with this picture?

The Question of Rug Ownership

Very happy to reblog. Patches is so sweet.

Patches is a very patient girl.  So sweet.  She really wanted to lay down in the spot where Rusty made himself comfortable.  So, she decided to take up the space next to Rusty.  As soon as she did, Rusty left the rug.

I’m always surprised by their actions.  One can never predict what they will do.  That’s part of the allure of cats.  They keep life interesting, for sure. 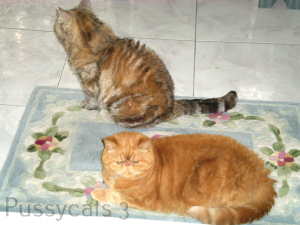 Queen of the Penthouse

She definitely is a queen.

The cat tree with the “penthouse” at the top has been here since Patches was a small kitten.  She has definitely “grown” into it.  And, of course, it’s one of her favorite places to take her afternoon nap.

Originally posted on Pussy Cats 3:
As cat lovers, we know how much our cats are drawn to a new paper bag on the floor.  It’s a new toy – one that provokes extraordinary curiosity and challenges. On a recent day,…

Assuring Quality and Standards in the Cannabis Laboratory

Question:  How can a medicinal marijuana patient or a recreational user have assurances that the cannabis product he/she is purchasing is safe and is actually the one prescribed or desired, no matter in which state the product is purchased?

Answer:  A cannabis chemistry committee was established last year and has now become a subdivision of the American Chemical Society (the largest chemical society in the world).  Of course, this will take work and time in order to establish central cannabis laboratory regulations,  creating precise standards which, hopefully, would eventually require adherence to by all laboratories.

According to an article in Culture Magazine, there are no standardized procedures at the present time and this has created a safety concern throughout the cannabis industry as well as for the users of the cannabis products.  Standard methods of production and screening for pesticides is a great concern.  The formation of this subdivision, under the jurisdiction of the Chemical Health and Safety division, is a progressive step in the direction of safety for the cannabis industry.

Not According To Plan

They are always surprising!

I just received an order from Drs. Foster and Smith.  One of the items (I ordered 4 at half-price each) was special “cozy cushions.”  I grew tired of using towels, etc., in my quest to keep as much cat fur off the couch as possible, and from turning my black couch, into a white couch!

I spread the cushions out, hoping that Patches (as well as Romeo), would spread out comfortably on the cushions, and save Mom from so much vacuuming.

When it comes to animals, things don’t always turn out the way you wanted. 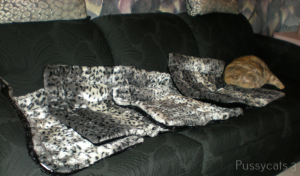 It looks like Patches didn’t understand my intention.  She usually had made herself comfortable on the opposite corner, but she “turned the tables” on me.  I do believe her head was very comfortably ensconced on the cushion; however, the rest of her “missed the boat.”

Emily has put together a great post which is so enlightening, especially for people who are not aware of the several “invisible disabilities” suffered by so many. Her info is based on those diagnosed patients in the UK, but the underlying significance is that this information can be a realistic comparison relating to patients of these diseases in the other countries around the globe.

A Prescription for M.E.