“If at eighty you’re not a cripple or an invalid, if you have your health, if you still enjoy a good walk, a good meal (with all the trimmings), if you can sleep without first taking a pill, if birds and flowers, mountains and sea still inspire you, you are a most fortunate individual and you should get down on your knees morning and night and thank the good Lord for his savin’ and keepin’ power.”

After reading this portion of a quote by Henry Miller on Brain Pickings, a blog by Maria Popova, I became intrigued enough (after all, I’m not too far from that “magic” number and fortunately still enjoy good health) to search out the author and find out the history of the man.

Henry Valentine Miller (December 26, 1891 – June 7, 1980) was an American writer. He was known for breaking with existing literary forms, developing a new sort of semi-autobiographical novel that blended character study, social criticism, philosophical reflection, explicit language, sex, and always distinctly about, and expressive of, the real-life Henry Miller and yet also fictional. – [paraphrased from Wikipedia] 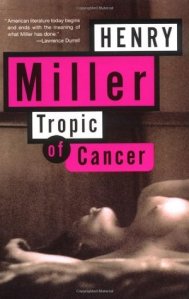 Due to charges of being pornographic, all of his novels were originally banned in the United States.  His Tropic of Cancer has been described as “notorious for its candid sexuality” and as responsible for the “free speech that we now take for granted in literature.”  It was first published in 1934 in Paris, France, but this edition was banned in the United States.  Its publication in 1961 in the U.S. led to obscenity trials that tested American laws on pornography in the early 1960s. In 1964, the U.S. Supreme Court declared the book non-obscene.  Tropic of Cancer is widely regarded as an important masterpiece of 20th Century literature.

I never read Tropic of Cancer, or any of Henry Miller’s books, but I’m still not that “intrigued enough” to tackle one right now.  I’ll have to think further about that.